Let us introduce the core LabyrinthUK performers to you. Each performer has a different specialism and can add something unique to your event. 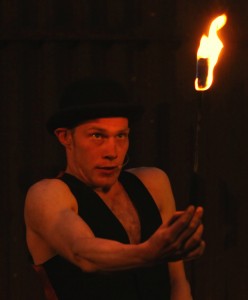 Danny5 is our frontman, maker and “illustrious leader”.

He found a passion for circus while working in Thailand building playgrounds following the 2004 Tsunami.  He began with fire spinning on beaches and since returning to the UK has broadened his skills and sharpened his microphone to bring his endless barrage of bad jokes and daft stunts to the streets.

With background skills in joinery, sewing and whatever it is he learned sailing on that Tall Ship for two years, he designs and builds sets, props and one off commissions for festivals, theatres, youth shows and fellow performers.

Danny5 is a circus mentor at Circus Central in Newcastle teaching children of all ages to juggle, walk on tightwires or swing on the high trapeze.

In the last few years Danny5 has been lucky enough to work with Graeae and La Fura dels Baus in Prometheus Awakes, Les Goulus in Main Jaune sur la ville. Performed acts in the circus field at Zieget festival in Budapest and his continued involvement with French artists Cie Carabosse has had him installing and lighting spectacular “Fire-Gardens” from Durham Cathedral to Derry via Bournemouth, Milton Keynes and even Stonehenge!

Danny5 is funny, witty, intelligent, handsome, charming, incredibly well endowed and in no way responsible for writing his own biography… 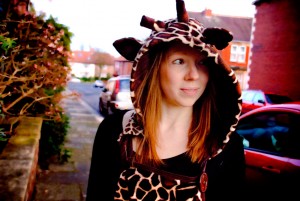 Since her degree, she has embarked on a career as a secondary school teacher of Dance and Performing Arts and now works as a freelance Dance and Circus Artist. Her passion for aerial dance has seen her work as an apprentice for world renowned Paper Doll Militia, creating her pieces ‘Chrysalis’ and ‘Caution: Fragile Content’ As well as her performance work, she has taught aerial dance for various companies within the North East of England and Scotland. 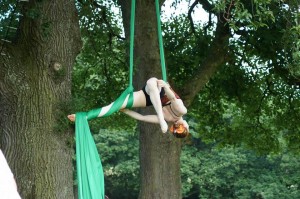 Claire is also a fire dancer and stilt walker, performing both as either a solo artist or as part of a fire duo with Danny5. 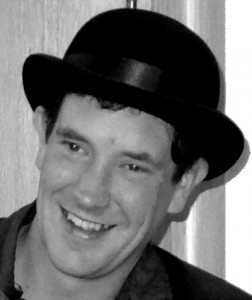 Born way down south in Sheffield, Yorkshire, Paul moved to the Tyne Valley when he was six years old. So he’s still a bit of a foreigner really.

Paul obtained degree in Philosophy and Politics before beginning his deep thoughts about unemployment. He was rescued from an ‘ordinary’ life by a Juggler he camped next to at Glastonbury festival who inspired him to move to London and focus his life on circus skills. He worked for Air Circus, then the Oddballs Juggling company and taught circus skills at The School of the Science of Acting and at Jackson’s Lane Community Centre.

A little later he met a Swedish magician shopping in Camden Town and a love of the Art of Magic took hold, leading to an obsessive compulsion to carry a deck of cards at all times. He joined the Magic Circle in 2005 and began performing magic at restaurants, weddings, nightclubs and private parties. 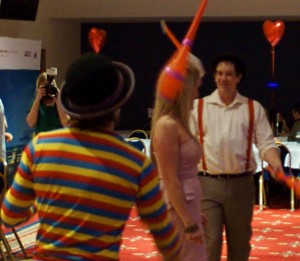 Paul studied clown at Circus Space London, and  acting and mime at City Lit, Covent Garden, alongside developing his manipulation skills. A seasoned performer, Paul has worked as a magician for a huge variety of audiences, from corporate parties for Channel 5, to muddy crowds at Glastonbury festival. 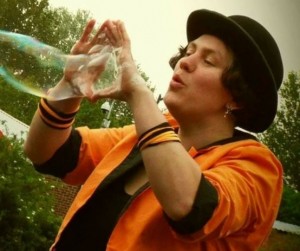 Jesse has 9 years experience of performing for a massive variety of crowds as a master maker of Bubbles. She has wowed festival crowds, racing enthusiasts and landed gentry with her stunningly beautiful art. As well as delighting thousands of children at parties and fetes.

Jesse is also a juggler and diaboloist. She began poi spinning in 1999 and followed her passion into other circus props including walking globe and unicycle. Jesse has worked for Oddballs, Butterfingers and Firetoys.com as a demonstrator and teacher. She currently teaches juggling, balance and other manipulation skills at Circus Central.